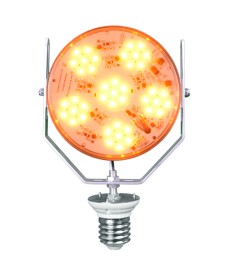 Sea turtles need help from humans who live and work near nesting beaches. While eliminating all lighting near beaches is not always practical or safe, there are ways to reduce our impact with little to no inconvenience. Mostly, outdoor lighting is wasteful illumination into the sky and adjacent properties. Global Tech LED's Sea Turtle Lighting uses specific distribution and wavelength of 590 nanometers. This wavelength is nearly invisible to Sea Turtles.

Bonita Springs, FL, May 23, 2016 (Newswire.com) - ​​Along the Florida Coast, sea turtles make between 40,000 and 84,000 nests annually. The eggs incubate in the balmy climate for two months and, upon hatching, the hatchlings find their way to the ocean. Sea turtles are naturally led to light and, as some stories go, they hatch under a full moon that guides them into the sea. Under most conditions, the turtle hatchlings are faced with two choices: the dark slopes of dunes and vegetation behind them or the gentle light of the ocean horizon ahead of them. But today the brightest light comes not from the horizon but from the hotels, condominiums, restaurants and homes that crowd most beaches. These bright lights draw the hatchlings towards civilization and away from the sea, causing them to grow disorientated, lose their bearings, and either die of dehydration, get run over by cars, or get eaten by predators.

Fortunately, Global Tech LED found a solution. Global Tech LED has been the leader in American made LED lighting since 2008, revolutionizing LED fixtures and large-scale lighting. After thorough research, Global Tech LED found that LED lights operating at a 590nm wavelength are nearly invisible for turtles. The company can produce these LED lights in retrofit kits and complete light fixtures. With the LED retrofit option, the old style light bulb can be replaced with a high tech LED module without replacing the fixture. In addition, the LED Turtle Modules ranging from 30W-100W have been awarded the Florida Wildlife Lighting Conservation Certificate making them perfect for coastal areas and making them doubly perfect for the urgent task of leading the sea turtles back to the ocean.

Florida is home to 90 percent of the sea turtle nesting in the United States and the loss of so many hatchlings due to bright coastal lights is posing a threat to three species of sea turtles. The numbers of green (Chelonia mydas), loggerhead (Caretta caretta) and Kemp’s ridley (Lepidochelys kempii) sea turtles are all dropping at alarming rates as the hatchlings are continually led astray by harsh coastal lights.

Making the switch to LED provides a solution. LED lights have proved to drastically reduce sea turtle hatchling disorientation due to their specific operational wavelengths and lower levels of visible light. David Godfrey, executive director of the Sea Turtle Conservancy (STC), echoes the success of LED lights in this endeavor, noting that urban properties that switched to LED have noticed a fall in hatchling disorientations, in some cases from hundreds a year to now zero. “It’s a long-term project to replace old lights,” he continues, “but it is working.”

LED lights also offer other benefits. They use 70 percent less energy than incandescent bulbs and provide a softer, more pleasing light, which the STC says can actually enhance people’s safety by not overwhelming human night vision. Beyond the LED bulbs themselves, new fixtures that point light toward the ground and are angled away from beaches also help reduce turtle disorientations.

Global Tech LED responded to these needs. Because of their research, they produced lights greater in wavelength finding this increase to render the lights nearly invisible to sea turtles. The lights match the current aesthetics, as lights from all manufacturers look the same, but Global Tech LED’s last much longer and cost much less to run. Each are made in America, use less wattage, has no lumen depreciation for 70,000 hours, and come with a 10-year warranty.

This project is about more than specs and just replacing lights. It is about finding ways to work together to improve our living spaces and the way the human world interacts with, and affects, the environment. At present, sea turtles have been dying at dramatic rates because of human light and finding a solution has become imperative. Global Tech LED offered that solution not only through their LED lights but through their specific approach. Understanding the importance of restoring sea turtle habitat, Global Tech LED applied research which allowed them to be able to respond in the most effective way possible, building the best LED light for coastal areas.

Thanks to these efforts and the replacement of old lighting with LED, baby turtle disorientation has begun to decrease, so much so that turtles are now nesting in new areas they have avoided in the past. Sea turtles are a vital element of the ocean’s ecosystem and fluctuations in their populations affect more than we know. Through Global Tech LED’s retrofits, hundreds of sea turtles’ hatchlings are now finding their way home.

Get notified about new releases.

Sign up for email updates from Global Tech LED.